This is an article by John Hayes of MyTennisLessons.com

This is an article by Jim McLennan, Tennis Director at Fremont Hills Country Club.

First, there are many ways to hit the ball and many ways to play the game.  Power or finesse, placement or spin, varying grips tactics and more.

As regards the serve, consider that there may be two distinct types of service hits used by the professionals, but equally as used by you and I.  We are not talking about spin, about the kick or even the cannonball – simply about how the ball is struck at the top of the swing – and about the nature of that “action.”

One variety, as shown with Andy Murray, Juan Martin del Potro, Maria Sharapova, and Dinara Safina – might be called a “hand speed” action – although truly if anyone has a clearer designation I am open to all suggestions.  But for me the photos show the hand accelerating if not actively pushing through contact, with significant flexion of the wrist.

An alternate, if perhaps entirely different action shown below, indicates a whip like effect, where the hand has decelerated at the same time that the racquet has snapped or accelerated. Paul Roetert, formerly of the USTA, had helped me on this serving project and used the term “endo rotation” to describe the motion of the forearm.

I ask the following question of students when they are demonstrating their overhand throw, “Does it feel like you are pushing or pulling the ball.” As often as not the poor throwers answer “pusing” and to my eye that is what I see. And the better throwers will say they are “pulling” and again I see something similar where the motion has an element of a leading elbow (to pull) prior to the release.

Ranked 8th, 25 years old, 5’11”, highest ranking was 4th following his run to the 2014 US Open finals, he has amassed over $10 million in prize money – and he is perhaps the quickest player on the court with as it is known – “excellent hands and feet.”

For better or worse, I believe Kei uses the hand speed/wrist flexion model – good enough to carry him to the top echelons of the game, but as even Nick Bollittieri said in a recent interview, his second serve (and by extension his overall serve) needs improvement.

In comparison, the photos above show Roger and Novak at impact (middle and right respectively).

We are not splitting hairs on this!

When the racquet head is offline from the arm – the rotational leverage from the forearm is increased.

When the racquet head is directly above the arm, the rotational leverage is diminished and all that is left for racquet head speed is wrist flexion.

There are a number of ways for you to explore this feeling.

First try this podcast on the Pete Sampras Snap.

Second -Explore my online course “Building the Serve from the Ground Up” with the following introductory series of FREE lessons.

Apply for the USTC Scholarship Program for a chance to join the 2015 U.S. Tennis Congress! 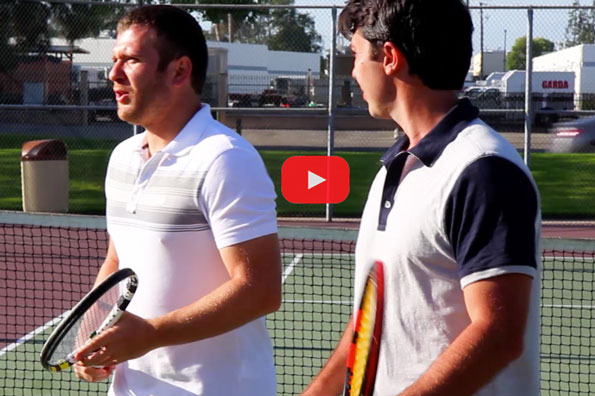 We’re thrilled to announce that we’ve just started our first Tennis Round fundraising campaign on IndieGoGo. Our perks include t-shirts, Pebble Smart Watches, stickers and Free Subscriptions to our Premium Plan. If you buy one of those perks you’ll support our campaign.

Visit our campaign to learn more >>

Over the last 4 years we’ve grown the Tennis Round community to include players from over 4,000 cities nationwide in the U.S.

Our goal now is to raise funds to grow the site and build the new features our members have asked us for – doubles, mixed doubles, leagues and tournaments, player matching (by gender, age, match results, availability), court reviews and ratings.

We hope you will find our story compelling and contribute to the campaign, so we can continue to build the site and grow the tennis community. Pricing for t-shirts is from $20 to $40 and some include Free Subscriptions to our Premium Plan, which is normally $29 per year.

Here’s a quick preview of some of our t-shirt designs: 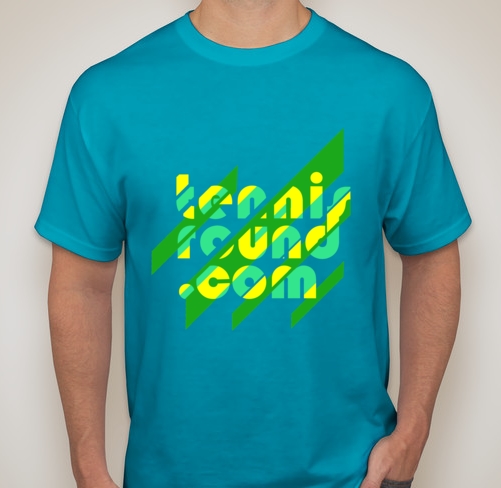 Please consider making a contribution today! When you buy one of our official t-shirts or Pebble Smart Watches you’ll be directly supporting the growth and development of Tennis Round, and get to keep a cool souvenir for youself.

Visit our campaign to select a t-shirt >> 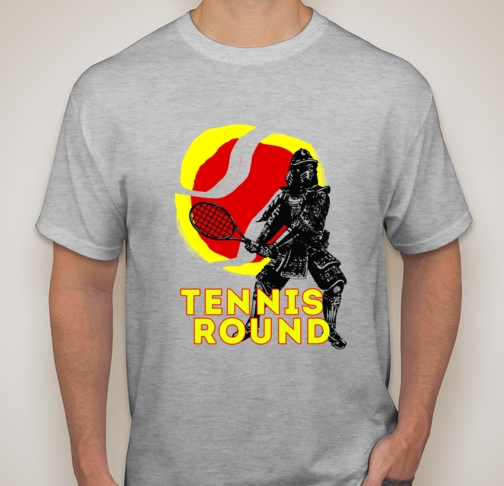 To see more t-shirt designs, review the other perks including Pebble Smart Watches with fitness apps and changing watch faces, and to learn more about our fundraising initiative, visit our official IndieGoGo page:

Visit our campaign to select a perk and make a contribution >>

Be among the first to own a QLIPP™, the Ultimate Tennis Performance Sensor.

We’re excited to introduce to you the latest innovation in tennis technology. Our friends from QLIPP™ have developed a performance sensor for tennis rackets that can help you bring your A-game when playing. To know more about the product, read on below.

The long-awaited time has come – QLIPP™,
the Ultimate Tennis Performance Sensor, is here!

What’s QLIPP™, you ask? QLIPP™ is a “smart sensor” that easily attaches to ANY tennis racquet to provide measurements and video playback of a player’s strokes, spin, shot speed and sweet spot accuracy. Combined with the free QLIPP™ app (iOS and Android), players can instantly view their gameplay overlaid with captured data.  You can also save each session for future reference or compare your performance to others using QLIPP™. In addition, the app has voice feedback so players can hear the app relay their stroke information while on the court playing. It’s the perfect training tool for tennis players, whether casual enthusiasts or tour professionals, to help improve your game.

We know you have been eagerly anticipating this special day
and we are just as excited as you are!

QLIPP™ LAUNCHED ON INDIEGOGO ON JUNE 24.

QLIPP™ launched their Indiegogo crowdfunding campaign on June 24, 2015 and would LOVE your support to help them complete the development of this amazing product. Visit their campaign, and be the first to get your hands on your very own QLIPP™ at a special Early Bird discount of 40% off the retail price of $129 USD while quantities last.

Are you fast enough for QLIPP™?
Snatch this incredible deal before it’s gone so you can smash the competition!

SPREAD THE WORD, SHARE THE JOY
Please tell your friends about QLIPP™ and give them the chance to experience
this power-packed tennis performance sensor for themselves.

Many thanks from the entire team at QLIPP™!

LONDON –   Top seed Serena Williams completed her impeccable first-round record and took another step towards the Grand Slam with a convincing triumph at Wimbledon having a 6-4, 6-1 scores against the world number 113 Russian qualifier Margarita Gasparyan. The first round was not stress-free as Gasparyan broke serve in the opening game and led with 3-1 scores. While crowd’s favorite 33 year old Serena Williams finally discovered Margarita’s rhythm she did not give Gasparyan another chance.

“I knew she would be a good player – I can’t say I thought she’d be that good, to be honest,” Williams said. “Obviously when you’re winning three matches in qualifying you’re ready to go the distance, and playing me she had nothing to lose. She played really good. Serena Williams also thought that she is losing again as Margarita came out so fast but Williams did not let it to happen. This is Serena Williams’ 17th first-round singles win at Wimbledon, with her no losses record at this stage.

Serena is now eyeing on winning all four majors Grand Slam in the same year. She already got the US Open, the Australian Open and French Open. The big question today is will she be getting the Wimbledon victory?

How to add home courts on your Tennis Round profile.

Where do you play tennis? Know the difference between Home courts and Location.

Your home courts are where other players can find you, and basically the grounds where you play.

The location you enter on your profile is unique and defines the area where you play. When you’re traveling or if you move to another city and want to play tennis there, you don’t have to close your account. You can simply update your location.

Below are step-by-step guides on adding or removing home courts and updating your location.

If you haven’t added home courts on your profile yet, Login then click Add a home court.

Enter your city or zip code on the search bar and click Find Courts. You can also filter your search by choosing options under Access, In/Outdoor, and Lighted.

If you’ve found your home court on the search results, click the Select as home court button to add it. You can add up to five home courts on your profile. 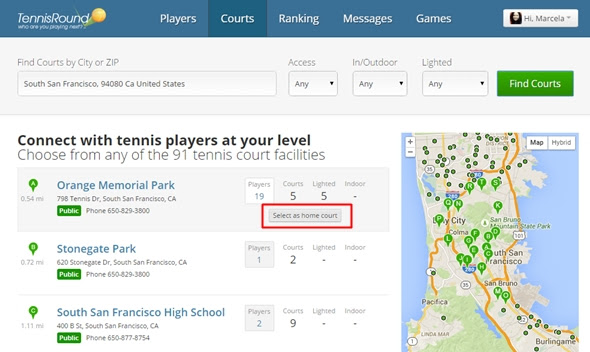 ​If you’ve mistakenly added a facility as your home court or if you no longer play in that court, you can easily remove it by clicking on the trash can icon beside the “Your home court” status. Another way to remove a court is by going to your profile and clicking on the trash can icon​ to remove that listing as your home court. 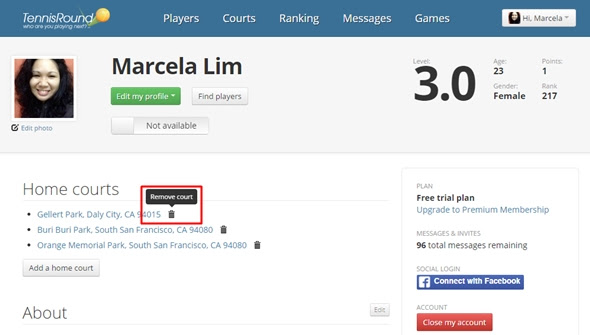 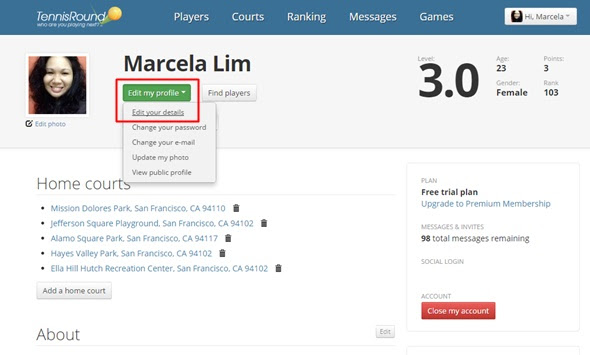 Under Where do you play tennis?, enter your location.  Click Update.

Tennis Round Blog
Blog at WordPress.com.