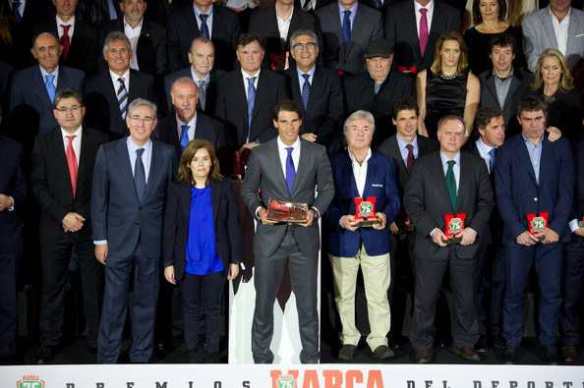 Truly year 2013 is Rafael Nadal’s moment to shine! Year 2013 has been a great one for him and he cannot count up his blessings any longer. In commemoration of the paper Marca.com 75 years, Rafael Nadal was chosen by their readers as the Greatest Spanish Athlete of All-Time or the “Legend Award” on night of Tuesday at Marca’s silver anniversary gala in Madrid. Rafael Nadal received a 25.6 per cent of full amount votes while the amazing Miguel Indurain on second rank along with NBA star Pau Gasol on third place.

Rafael Nadal speech was “I would like to thank everyone behind me and all those who aren’t here tonight because as well as tennis, I’m mad about sport in general,” Nadal said. “I have had some unforgettable afternoons thanks to all those who have taken Spain to the highest level in sport. Thank you so much because that excitement is what makes sport feel different.”

Rafael Nadal deserved this award as he showed exemplary performance that his fans beyond doubt enjoyed. He is a big example of a sportsman and everyone is more excited on what 2014 brings him. No one can own this title but him Vamos Rafa!