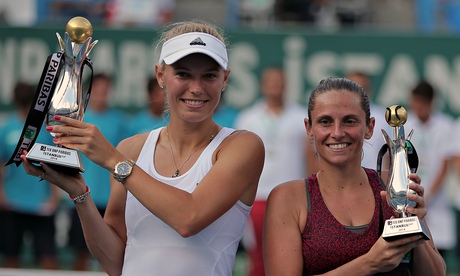 The marvelous number one seed Caroline Wozniacki got her victory in just a period of time. To be exact it was sixty seven minutes only. She can’t believe it but it is her fate today! Wozniacki thrashes Roberta Vinci with 6-1, 6-1 scores to win Istanbul WTA final and settle her first title of the year. She indeed showed her strong side, show no fear and defeated Vinci.  Wozniacki cited ”I served well and pushed her around the court,” at the hard-court Koza World of Sport Complex. In addition, Caroline Wozniacki mentioned  “I am happy to have won my 22nd WTA title — It is a great feeling!”

In Vinci interview she stated that tried to play aggressively like always, but made a lot of mistakes,”  “It is hard to play like that next to Caroline for the reason that she puts everything back in the court and it was tough for me to stay in the rallies today, but I’m happy with my week as well as Caroline just played much better than me.”

Wozniacki, ranked 15th in the world, now has an impressive haul of 22 WTA titles and will continue to perform marvelously and will make her fans prouder.