Maria Sharapova knocked out by qualifier 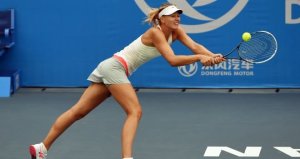 Bacsinszky finally get her hands on her grandest victory by winning against the world number four  twenty seven year old, Russian Maria Sharapova with 7-6 (3) 7-5 scores.  Maria Sharapova doube faulted six times during first set. She was knocked out in the third round of the $24 million Wuhan Open and became the latest to exit the WTA Wuhan Open that made her fans cheerless.

Sharapova mentiond in one of her interviews that Timea Bacsinszky had a really good serving. I could  not shake her off. Incontrovertibly her biggest win of her career. Maria Sharapova’s defeat follows the exit of other seeds namely; Halep, Errani, Petkovic, Jankovic ending in a back injury and in addition to the alarming list is the world number one Serena Williams leaving the 1.5m because of a viral illness.

On the other hand, thrid seed Petra Kvitova won against Karolina Pliskova with 6-3 2-6 6-4 scores. Other victorious players are Cornet who won over the Belgium wildcard Flipkens with 7-6 (7-4) 1-6 6-3 scores.

Fans are asking what is happening to the Tennis world to the top tennis players?! The amazing players must do something in order  to get back on track and get their victory back.