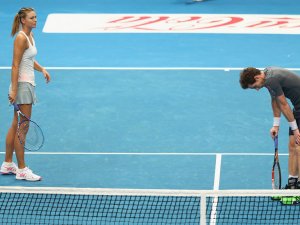 It was not a good start and definitely a not so nice hello for Andy Murray and Maria Sharapova to all the Tennis fans in IPTL debut in the Philippines. The British number one tennis star player, representing the Manila Mavericks was beaten in singles by the Indian Aces’ Gael Monfils. Andy Murray tried his very best but lost the final three games to go down 6-4. On second day he linked up with Maria Sharapova in the mixed doubles only to suffer a 6-1 score loss to Rohan Bopanna and Sania Mirza.

“An event like this gives tennis fans in the Philippines an opportunity to come and watch some of the best players in the world and experience live tennis in a completely different format, a fun format,” Murray said in an interview in Manila.

Murray will go back to court on Sunday against world’s number one Serena Williams’ Singapore Slammers team. The four team event will move on to Singapore, Delhi and Dubai, with the final on 13 December.