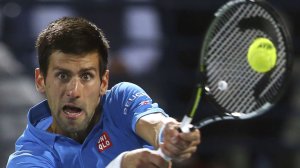 World number one Novak Djokovic won against the most dangerous player, Marcos Baghdatis with 6-1, 6-3 scores in a span of fifty nine minutes to reach the third round of the BNP Paribas Open on Saturday. Novak Djokovic thought he had a solid performance because he served well and stayed aggressive in the court. Novak got the first set while Baghdatis got the first game of the second set yet still struggling. Djokovic did not give Marcos any chance to come back in the game with his précised serving.

“Great performance against a quality opponent, somebody that was a former top 10 player and knows how to play on the big stage,” Djokovic said. He also mentioned that this tournament is one of the strongest one after the Grand Slams that’s why it is hard to win twice in a row. The marvelous Novak Djokovic is our defending champion at Indian Wells and currently bidding for his 50th title. Will he make it? Or break it? Everyone is excited what’s next for Novak and his fans are so positive that everything will fall into right place.

Djokovic forwards to third round where he will play against Albert Ramos-Vinolas of Spain.