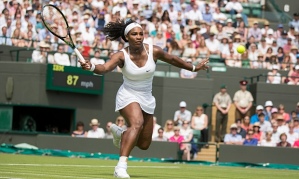 LONDON –   Top seed Serena Williams completed her impeccable first-round record and took another step towards the Grand Slam with a convincing triumph at Wimbledon having a 6-4, 6-1 scores against the world number 113 Russian qualifier Margarita Gasparyan. The first round was not stress-free as Gasparyan broke serve in the opening game and led with 3-1 scores. While crowd’s favorite 33 year old Serena Williams finally discovered Margarita’s rhythm she did not give Gasparyan another chance.

“I knew she would be a good player – I can’t say I thought she’d be that good, to be honest,” Williams said. “Obviously when you’re winning three matches in qualifying you’re ready to go the distance, and playing me she had nothing to lose. She played really good. Serena Williams also thought that she is losing again as Margarita came out so fast but Williams did not let it to happen. This is Serena Williams’ 17th first-round singles win at Wimbledon, with her no losses record at this stage.

Serena is now eyeing on winning all four majors Grand Slam in the same year. She already got the US Open, the Australian Open and French Open. The big question today is will she be getting the Wimbledon victory?